We would like to express a special thank you to Richard Capes for sharing his artwork of many of the historical buildings & scenes around Sarasota County. His talented works give us a wonderful insight into the history of Sarasota County as we celebrate the Centennial. We'd also like to thank our Centennial Partner photographer Rick Benitez for capturing the artwork in high resolution so we all may enjoy viewing the images.

Richard Capes moved to Sarasota in 1974 and has contributed to historic preservation by capturing a moment in time, sometimes just before the wrecking ball swings into action. He loved building and construction from childhood when he used to take the produce crates from his father’s restaurant in Atlanta and make forts out of them. History has always been a great interest and it was natural to combine the two in Sarasota. 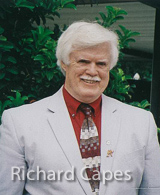 During his career, Capes has created dozens of images of historical places in pen and ink drawings, watercolor and acrylic, such as the Dr. C. B. Wilson House in Urfer Family Park, which is included on our Bee Ridge auto tour. Capes' studio is a stop on our Phillippi tour.

“That historic structure represents the challenge of working on an old building,” said Richard Capes. “First you have to determine the right angle to feature. I settled on a three-quarter view because it showed off the chimney, which is important. Then, there’s getting the detail of the trim and stonework right. It took a great deal of forethought and a lot of concentrated time to make it authentic for historic documentation, but also successful as a signature work of art.”

Richard has documented old churches, schools, train stations, courthouses, humble homes and grand ones, such as Ca’ d’Zan, one of his most popular subjects and one that he has painted many times. Capes’ paintings have been reproduced on posters, note cards and prints. His book on familiar Siesta Key landmarks remains a popular seller.

“I do a lot of research before I start a painting on a historic building,” says Capes. “And sometimes I have to do it fast; I did a painting of the old Mira Mar Hotel just ahead of the wrecking ball. And I was on the board that tried to save the John Ringling Towers. That building was a great loss to preservation efforts in this town. I painted it for the first time in 1974 and rendered it often over the years from many different angles and in several media. I miss it.”

“The Guptill House and Mary’s Chapel at Selby Gardens Historic Spanish Point are special to me,” he admits. “And I love Edson Keith’s farmhouse at Phillippi Estate Park, the Orange Blossom Hotel and, of course, the New Pass Bait Shop. That little building conveyed what life was like in old-time Florida. A lot of artists were sorry to see that piece of history disappear.”